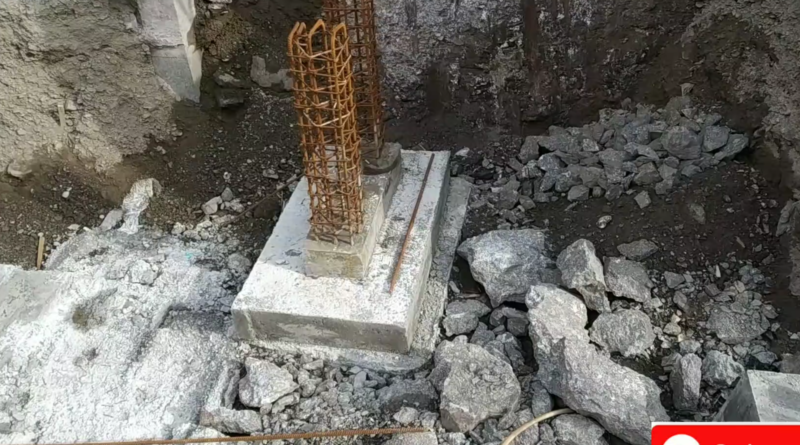 It provides support to the entire building .These are two type of foundation are as following :-

A deep foundation is a type of foundation which transfers building loads to the earth farther down from the surface than a shallow foundation does, to a subsurface layer or a range of depths.

A shallow foundation is a type of building foundation that transfers building loads to the earth very near to the surface, rather than to a subsurface layer or a range of depths as does a deep foundation.

Footing is a type of foundation which consists of concrete or brick, in square, rectangular or trapezoidal shape.Footing takes load from the column and transfers uniformly to soil to assure uneven settlement.

Footing or a shallow foundation is placed immediately below the lowest part of the Superstructure supported by it.Some examples of footings are:

Footings can be of the following types.

It supports two columns. It is used when the two column are so close to each other that their individual footings would overlap.

By combining it with that of an interior column, the load is evenly distributed. A combine footing may be rectangular or trapezoidal in plan. Trapezoidal footing is provided when the load on one of the column is larger than the other column.

It consists of two isolated footings connected with a structural strap or a lever. The strap connects the footing such that they behave as one unit. The strap simply acts as a connecting beam.

A strap footing is more economical than a combined footing when the allowable soil pressure is relatively high and distance between the columns is large.

It is circular, square or rectangular slab of uniform thickness. Sometimes, it is stepped to spread the load over a larger area.

When footing is provided to support an individual column, it is called “isolated footing”.

It is a large slab supporting a number of columns and walls under entire structure or a large part of the structure.

A mat is required when the allowable soil pressure is low or where the columns and walls are so close that individual footings would overlap or nearly touch each other.

Mat foundations are useful in reducing the differential settlements on non-homogeneous soils or where there is large variation in the loads on the individual columns.

9 thoughts on “Difference Between Footing and Foundation”