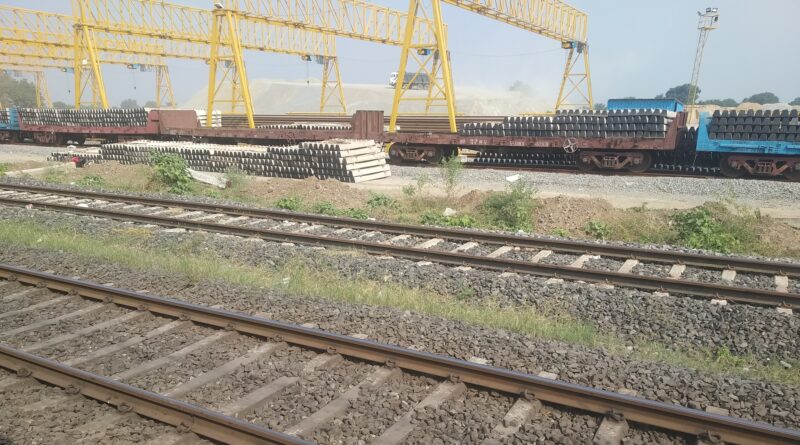 1.The minimum depth of ballast below the sleeper on any gauge adopted by Indian railway ?

2.Normally on a curved track , the number of dog spikes per rail seat is ?

Two outside and one inside

3.In metric units the rail is designated as in terms of

4.The number of bolts in fish plate at particular joint is generally

5.For Broad Gauge ,the Indian railways has standardized a rail length of ?

6. The broad gauge has a width of

7. Tensile strength of steel used in rail should not be less than

8. The cross sectional area of 52kg flat-footed rail is

9. What will be curve lead for a 1in 8.5  turnout taking off from a straight BG track ?

10. Composite sleeper index is the index of

11.switch angle is the angle between

The gauge face of the stock rail and tongue rail

12. The formation width for a single line meter gauge track is embankment as adopt on Indian railway

13. The rail is designated by its

14. two important constituent in composition of steel used in rail are

15. George Stephenson succeeded in running the first train of the world in 1825

16. The first train in India  was run in

17.The first train in India was run between

18.The railway system in india is the ………………. Longest in the world under a single management

20.The rail section, now a days used in indian railway is

21.The width of top portion of s flat footed rail is

22.The rail section is designated by its

23.The largest dimension of trail section is

24.For meter gauge track ,in Indian railway the standard length of the rail is

25.No sleeper is placed just below the rail joint ,as it will cause

More impact and discomfort to passenger

26.To reduce the wearing of rails ,the rails are placed at an

27.The conning of wheels is made to prevent the

Damage of the inside edge of rails

Opening of rail joint and Buckling of track

30. The Impact of the rail wheel ahead of the joint give rise to the creep of the rail .This statement is according to